In response to interest in structural surface design for novel forms, CRAFT has been researching a two-pronged approach to its structural surface design—Section Modulus Optimization and Stress Patterning. After the initial steps of discretization and Finite Element Analysis, the goal is to use the data gathered as a parameter in the adjustment of surface properties. The two avenues explored in this study are local surface thicknesses and the patterning of structural reinforcement throughout the surface.

This was achieved in Grasshopper using Millipede and Karamba analysis engines. Illustrated here are Karamba’s Iso-Lines, paths between equal principal stresses across a shell structure. The contoured map tells a story similar to that of a topographical one, with increasing scalar values expressed in two dimensions. Below, a combination of Karamba’s Force Flow Lines, overlaid with a color-gradient Von Mises Stress map, illustrates multiple modes of stress representation. The Force Flow Lines, or load paths, map the distribution of loads over a shell, forming eddies in areas of ineffective force direction. Either of these line-mapping techniques could be implemented in the creation of a novel structural pattern. 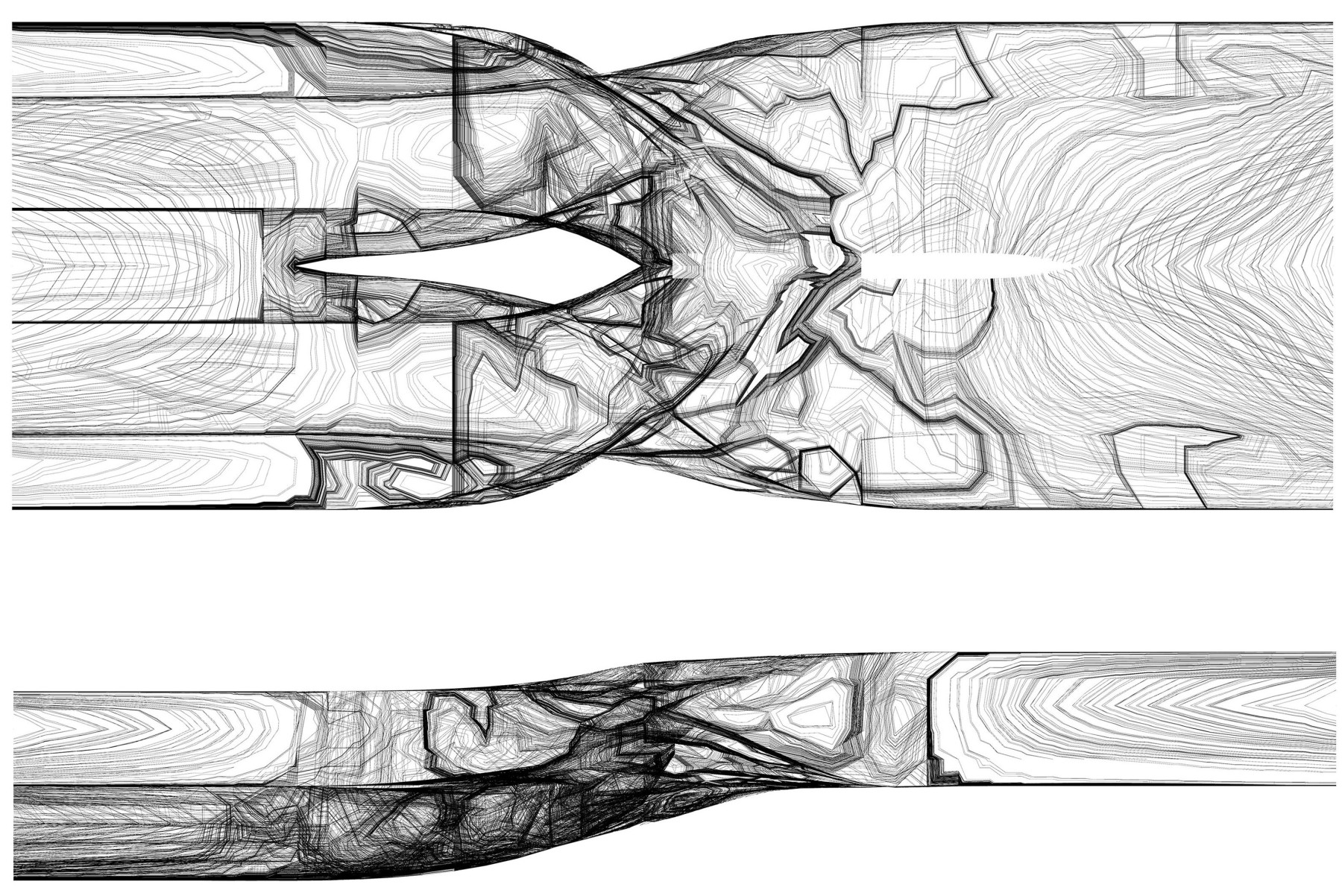 By translating the scalar data from the Von Mises Stress map into vector data, the depth of the slab can be scaled using the local section modulus of each analysis element, in a process called Section Modulus Optimization (SMO). Holding the system stress at a uniform 3000 PSI and allowing the slab depth to vary from 6” to 24”, the solid result is calibrated to the architect’s formal ambition.

Structural Patterning is nothing new. With the Pantheon, Apollodorus created one of the most enduring examples of structural expression — pictured here in partial section. Its ornamented coffers form a waffle slab which accents the enormous concrete dome, while decreasing weight. This language has remained untouched for almost 2000 years, while the lower sections have been remodeled with the fashions of the centuries that followed. 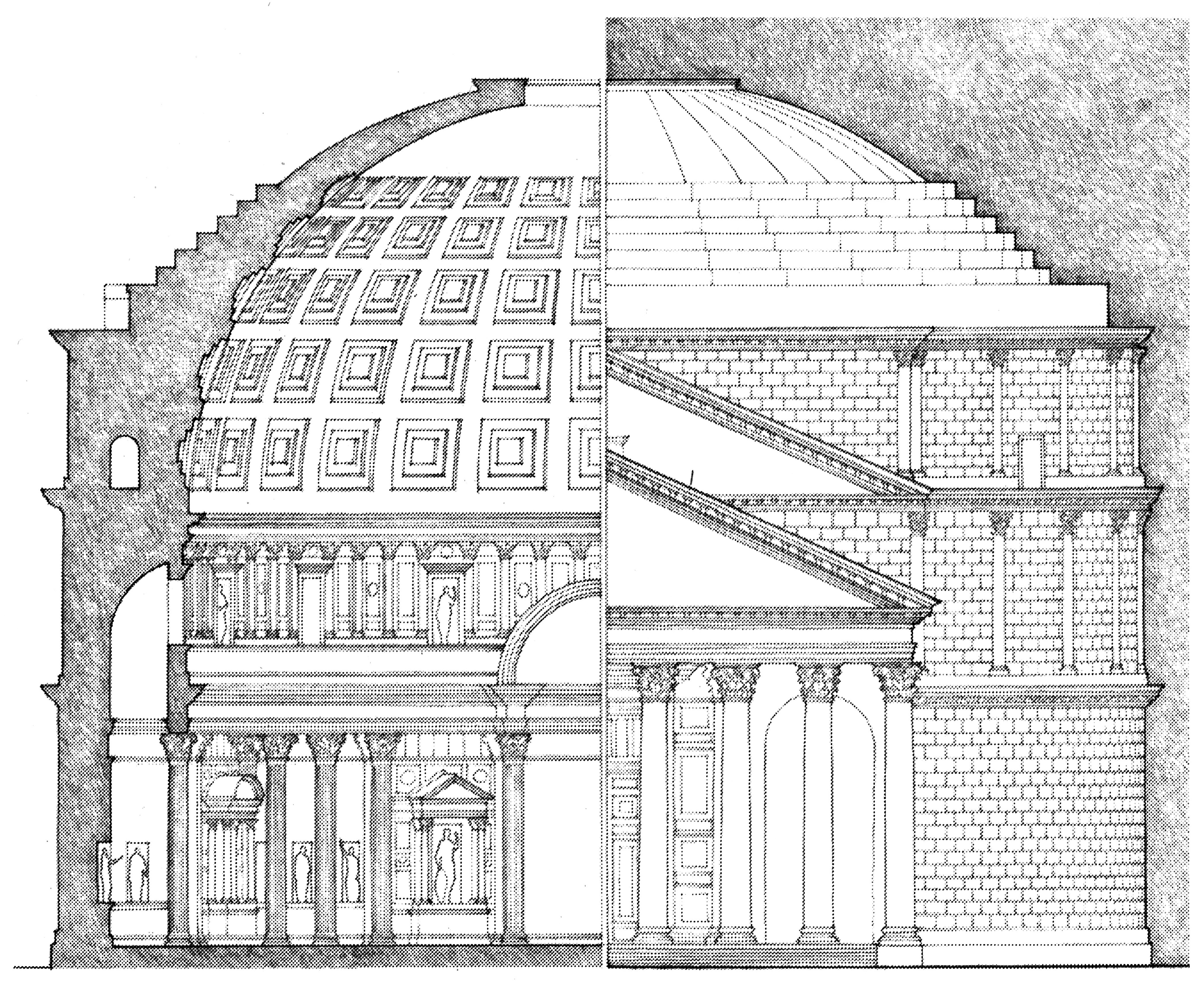 When building with concrete, or other plastic materials, the organization of the waffle slab ribs presents an exciting opportunity for novel Stress Patterning. Karamba and Millipede present beautiful options for mapping directions of principal stresses, load paths, and iso-lines of stress. The most structurally meaningful patterning utilized a scale field to adjust the density of ribs according to intensities of stress, yielding a field of expanding and contracting cells that could be expressed as concrete coffers. 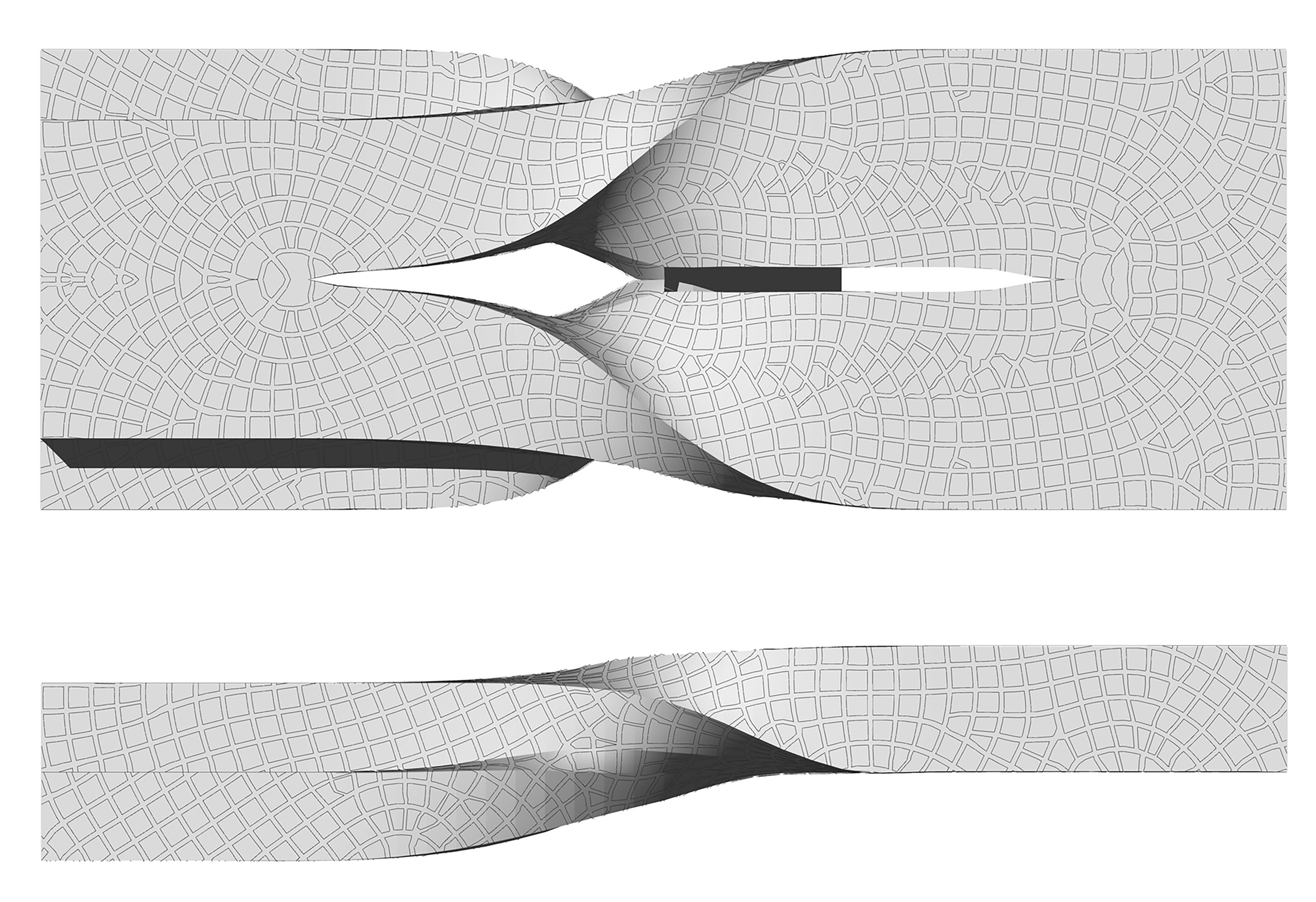 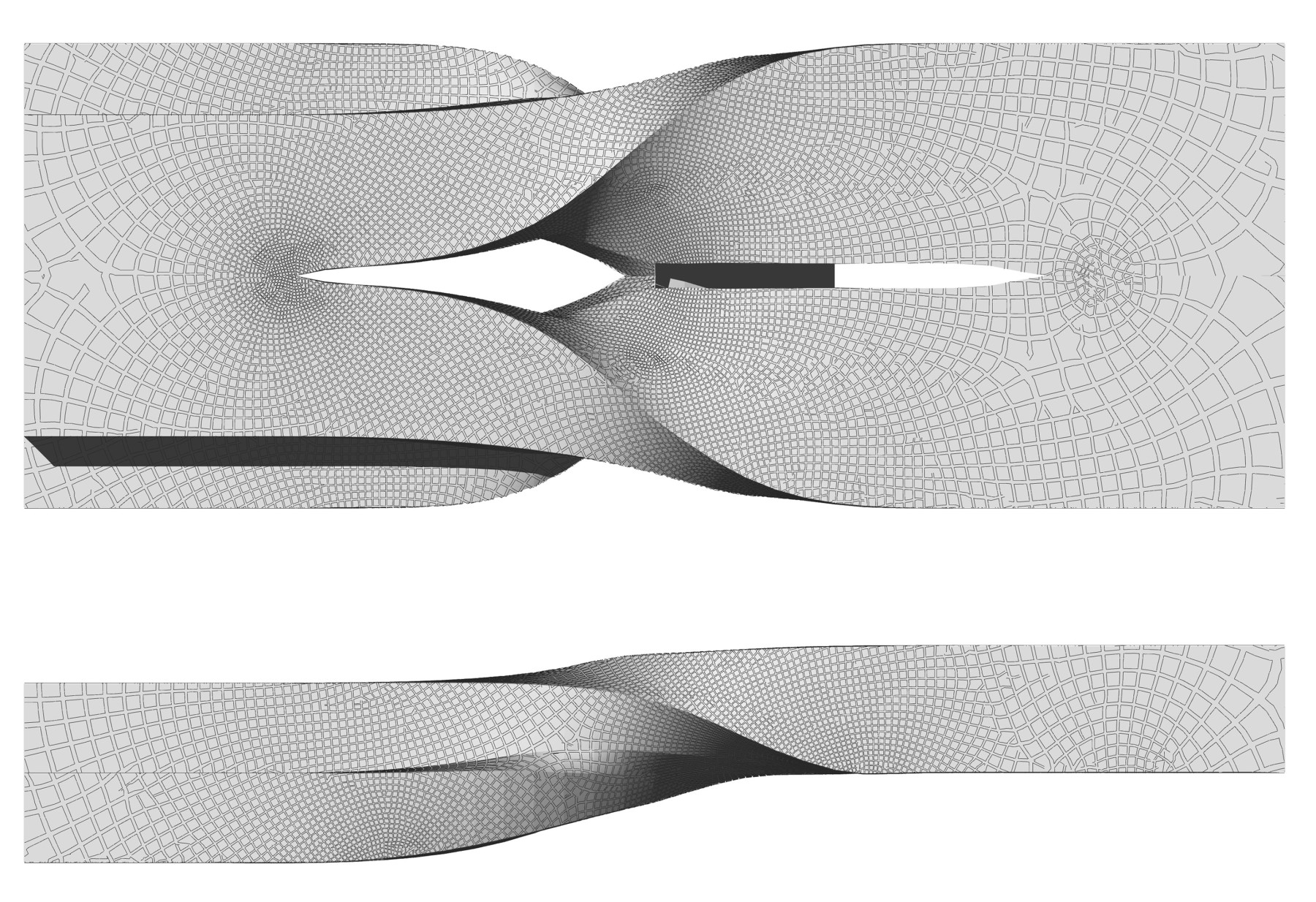 Further development of stress-optimized structural patterning may combine Modulus Optimization and Stress Patterning to achieve an expressive and efficient system rendered in the most potentially plastic of construction materials.

Seema Bajaria is the Marketing Director for CRAFT | Engineering Studio. She holds a Bachelor of Science in Mechanical Engineering from MIT as well as a master’s and PhD in biomedical engineering from the University of Michigan. Her academic experience includes post-doctoral work in computational modeling of infectious disease, specifically the dynamics governing the progression of HIV in the human body. Her industry experience spans computer simulation of diseases at Entelos, life science consulting with Price Waterhouse Coopers, and most recently mathematical modeling and science writing for various biotech industry leaders.

Seema has a special interest in clear and compelling communication of research and engineering. She is most excited to use her multidisciplinary background to further the conversation between structural engineering and art and architecture.

Hayley Brunetto is the Office Manager for CRAFT | Engineering Studio. Working with the elite team of engineers at CRAFT, her role keeps her involved in all aspects of the company. She received her Bachelor of Fine Arts in Photography from Arizona State University, whereupon her creative interests continued to develop across multiple mediums. An individual with experience that now spans across fields of photography, design and publishing, she has worked alongside innovative and prolific companies, each considered to be at the forefront of their respective industries. Her extensive background in both artistic and administrative realms allows her unique insight into the interplay between creatives and day-to-day business processes.

Nathaniel Stanton PE CE SE is the Principal and Founder of CRAFT | Engineering Studio. He is a licensed Structural Engineer with over 20 years of experience who holds a Bachelor of Science in Mechanical Engineering, a Master of Architecture, and a Master of Science in Civil (Structural) Engineering. Currently, he is working towards a PhD in a combination of these fields within the framework of digital form development. Nathaniel received his education at the University of Michigan, the Swiss Federal Technological Institute (ETH) in Zurich and the University of New Hampshire. In addition to practice, he has lectured at Columbia University, Harvard University, the University of Michigan, the Pratt Institute and the Stevens Institute of Technology.

Prior to launching CRAFT | Engineering Studio, Nathaniel founded and ran the Special Projects Group at Buro Happold Consulting Engineers in New York. In this capacity, he worked on many prominent projects with geometrical, analytical or material complexity, including the World Trade Center Visitor Orientation Center Atrium with Snohetta, the New Amsterdam Pavilion in Manhattan with UNStudio and the Phoenix Civic Space Sculpture “Her Secret is Patience” with the artist Janet Echelman.

Alexander Bernstein is a Senior Project Engineer at CRAFT | Engineering Studio. Alex is a licensed Professional Engineer who has worked in a variety of engineering disciplines in both design and construction, earning his Professional Engineering license in 2015. His education includes a Bachelor of Science in Mechanical Engineering from Pennsylvania State University and a Master of Engineering from the Product Architecture and Engineering program at the Stevens Institute of Technology. Alex has a passion for the integration of product design and structural engineering to challenge traditional practice and explore non-standard materials and analysis methods in the design of structures. Prior to joining CRAFT, Alex was a member of the Analytics group at BuroHappold Engineering in Manhattan.

Michael Licht is a Senior Technical Designer at CRAFT | Engineering Studio who holds a Master of Architecture from the Pratt Institute in Brooklyn and is an Associate Member of the American Institute of Architects. Michael has a special interest combining visualization, modelling and computation to inform the expression of exposed structures, as well as using iterative processes with analytical output to optimize the performance of his designs. Prior to joining CRAFT, Michael split time working as a Designer at Smith Miller Hawkinson Architects and as a Technical Designer with the Structures group at BuroHappold Engineering in Manhattan. In addition to practice, Michael has taught at the Pratt Institute as an Architectural Studio Instructor.

Eleni Maglari is a Project Engineer at CRAFT | Engineering Studio. Eleni has experience in the structural design and analysis of new and the refurbishment of existing residential and commercial projects. She holds a Master of Engineering from University of Glasgow and the Glasgow School of Art, achieving an Engineering Excellence award in each year of study. Eleni completed her dissertation on the Computational Homogenisation of Composite Materials, using Finite Element Analysis to understand the local behavior of woven fibers within a composite matrix. She is especially interested in fusing her backgrounds in architecture and engineering within the context of structural engineering consulting.

Martyn is a Senior Project Engineer at CRAFT | Engineering Studio. He holds 9 years of experience in design and project management across a wide range of project types and scales.

Martyn has a passion for creativity and technical excellence in design and has particular interests in historic building work and the engineering of mass timber structures. In previous roles held in London, he worked with several high-profile architects on progressive and challenging schemes. He holds a Master of Engineering from The University of Manchester and is a Chartered Member of the Institution of Structural Engineers in the UK. Prior to joining CRAFT, Martyn was an Associate at Corbett & Tasker in the UK.

John Larkey is a Senior Project Engineer at CRAFT | Engineering Studio. John is a Chartered Engineer and Member of the Institution of Civil Engineers in the United Kingdom with 10 years of experience who holds a Master of Engineering Science from the University of Oxford.

Prior to joining CRAFT | Engineering Studio, John was a Senior Structural Engineer at Gilsanz Murray Steficek LLP in New York City. He started his career at Ove Arup & Partners Ltd. in London, UK, before working for Robert Bird Group Ltd. and spent five years as an integral member of the then recently formed structural engineering team at Foster + Partners Ltd. in London.

John is a structural design engineer and project manager with a strong integrated design philosophy developed over many years of design consultancy working with highly technical and bespoke structural and aesthetic objectives. This experience includes working with international multi-disciplinary building design teams and globally renowned architects on prestigious projects with geometrical and analytical complexity from initial concept design through to construction administration. He believes that the key to successful design is in a collaborative interdisciplinary effort between architects, engineers, and builders from the onset of a project. His international experience means he is familiar with US building codes, Eurocodes and British Standards. His prior role in New York City required ICC certification as a Structural Steel and Bolting Inspector, Welding Special Inspector and Reinforced Concrete Special Inspector Associate, and he is also a Revit Structure Autodesk Certified Professional.

Marquis Williams is a Project Engineer at CRAFT | Engineering Studio. He holds both a Bachelor of Science in Architecture and a Bachelor of Science in Civil Engineering from the University of Hartford. He has held several leadership roles in Engineering Associations such as the American Society of Civil Engineers and the National Society of Black Engineers. Marquis also brings prior hands-on multidisciplinary experience in drafting, model building, and construction management. Marquis believes that solutions to contemporary needs are interdisciplinary, best forged in a collaborative effort between architects, engineers, and builders.

Antoine is a Project Engineer at CRAFT | Engineering Studio. He has previous experience in design, modeling and simulation of multi-story buildings. He holds a Bachelor and Master of Science in Civil Engineering from the École Spéciale des Travaux Publics (ESTP Paris) and a Master of Science in Structural Earthquake Engineering from UCLA. He has experience implementing US and European codes and with various software programs required in structural analysis.